April 20, 2018
This is it, week 9 -- "Presentation Week" for Genius Hour! Students have spent the past 8 weeks learning and creating things they are passionate about. They've watched YouTube videos, followed countless tutorials and experimented on their own. They've witnessed amazing successes and spectacular failures, learning invaluable lessons from both.

So, without further delay, let's get to the good stuff: the students. In the end, there were so many amazing presentations about such a diverse range of topics that there's no way I could cover them all. Instead, let's review some of the more unique projects, the surprises, and the "big wins".

To kick things off, I'll once again defer to the students and let them tell you about Genius Hour in their own words. Zack wanted to learn about cinematography so he decided to create a video about...well...Genius Hour.

He learned how to operate his personal camera better when shooting video and brushed up on his video editing skills in Adobe Premier. When he wanted a dolly shot moving around the room, we didn't have a dolly or track, so he had a student push him around the room in a rolling chair while he shot it video. 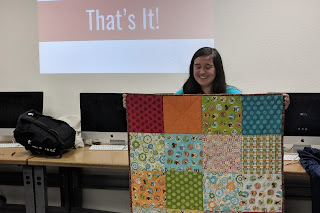 Janyce wanted to learn how to sew, so she decided to make a quilt. After watching tutorials on YouTube, and a little trial-and-error, she successfully completed her quilt and presented it to the class. I think she was very proud of her accomplishment, as she should be. This skill definitely qualifies as something I'm not qualified to teach.

Keep in mind that she did all the sewing at home and used her Genius Hour in class to research, watch tutorials and journal her learning.

One of the highlights of day two was when this duo of students, who researched and presented the history of ballet, got the class on their feet so they could teach them some of the traditional ballet positions. 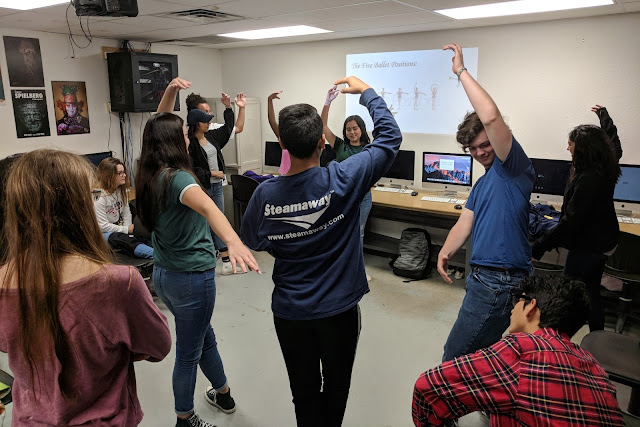 I'm not quite sure they're all ready to perform on a stage any time soon, but it definitely made for a fun presentation.

One of the more common "reasons" that students gave as to, "Why they wanted to use Genius Hour to learn whatever they were going to learn," was surprisingly not that they recently acquired something new. The more frequent answer was something like, "I got a ukulele for Christmas a few years ago, but I've never taken the time to learn how to play it."

Alyssa was one of those students.

After only 9 weeks, this amazing performance makes me wonder what else have students just not "taken the time to learn"?

Sometimes things didn't always go as planned. Things break, accidents happen, and sometimes things don't turn out anything like you predicted. While none of these things were a planned part of the Genius Hour lesson, they are an unavoidable part of life.


Successful students don't let the challenges of life get in the way of their passions.

A Bug in the System

Josh wanted to learn how to program a computer game in Unity, a popular game engine. He knew Unity used both JavaScript and C# for its programming. He even knew a little JavaScript before Genius Hour began. But what he didn't know was that with it's most recent update, Unity dropped support for JavaScript.

Josh spent the first 3 or 4 weeks furthering his knowledge of JavaScript before attempting a Unity tutorial the following week. It was then that he he discovered the effects of Unity's latest update. He was, understandably, upset and annoyed. He wanted to drop the entire project and start over with something new. Instead, Josh and I talked, and I urged him to take a look at C#.

He spent that week reviewing C# tutorials before coming back to me and stating, "C# really isn't that much different than JavaScript."

So he continued work on his game and ended up learning a little more about JavaScript as well as the basics of C# during his Genius Hour.

Genius Hour is responsible for revealing our own 9th grade MacGyver, the king of creative problem solving. Garrett, a future restaurant owner and chef, wanted to spend his Genius Hour learning about and making cheese.

Apparently a lot more goes into making cheese than I ever imagined, and a lot of it appears to require special tools and equipment. While Garrett didn't have those tools on hand, that didn't stop him from making plenty of cheese.... He just had to repeatedly find ways to solve the problems that popped up.

I had no idea that you're supposed to stretch mozzarella cheese at a solid 185 degrees before it cools off. While Garrett didn't have the appropriate mitts on hand, he made-do by wrapping his hands in washcloths then wrapping those in zip-lock bags to prevent burning his hands.

I also didn't know that during the making of some cheese, the cheese must be run through a special machine that presses the cheese. Honestly, I don't know the function (it wasn't my Genius Hour). Despite not having a "cheese press" on hand, Garret found that setting four paint cans on top of cheese in a mold performed the same task nicely. 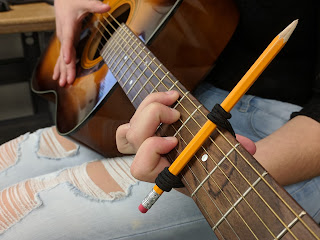 One of my favorite creative problem solving moments from Genius Hour, still comes from that second week. Alanis, who was learning to play guitar needed a capo for a song. Since she didn't have one on hand, she improvised one with a hairband and a pencil.

Recovering from a Crash

After 7 weeks of hand animating drawings, Dante's computer died the final week of Genius Hour. But not to be deterred by the random computer death, he shifted software and stayed up all night the day before his Genius Hour presentation just to make up for the work that was lost in the hard drive crash.

For the Next 9 Weeks

I told the students that if they received at least an 80 on both their Genius Journal and their Genius Hour presentation that they would be invited to participate in Genius Hour for the final 9 weeks of school. I would estimate that included around 85% of the students.

Those students will be allowed to continue their learning from the previous 9 weeks or choose to learn something entirely new. The biggest requirement, like last time, is that they learn something they currently don't know how to do.

While these two presentation days were the "big day" for most of our Genius Hour students, a dozen or more of them are presenting their Genius Hour projects at Village Tech's educational Superbowl known as "Forge On."

On April 21st, Village Tech will present an enormous exhibition of student learning for the entire community. Students from grade level pre-k to the 12th grade will demonstrate what they learned for the year with community driven challenges. It's a day of food, fun, community and amazing student work. It's really an event that has to be experienced to comprehend.

To find out more, visit the 2018 Forge On website.


Running Your Own Genius Hour: Tips

In the past 9 weeks I have stumbled, been shocked, been surprised and been enlightened by what I've seen. Things didn't always exactly go as planned (which honestly, is the one thing that didn't surprise me). For those teachers bold and brave enough to attempt their own Genius Hour, here are a few words of wisdom that I'd like to share:

In my mind, Genius Hour has proven that students can take ownership of their own learning if given the opportunity. They will plan, carry out and present learning that extends far beyond the traditional classroom curriculum and even beyond the expertise and knowledge of the teacher.

Students will become researchers, scientists, creators and teachers in order to accomplish tasks they are passionate about.

All we have to do, as teachers -- is get out of the way and let them.

Since this was my first "Genius Hour," I too have had my own fair share of successes and failures that will not only affect how I manage future experiences but also how I run my class on a day-to-day basis. It also gave me a deeper connection to my students as I learned about their interests asking them to teach me about their passions.

As with the students, this post wraps up my Genius Hour. This was my experiment to try something different, something my students could be excited about. It was my hope that they would explore their passions and learn something new. Little did I know how much they would teach me.

Some people may see Genius Hour as a waste of precious class time. They may see it as a complete lack of control that welcomes chaos into the classroom.

However, after this past 9 weeks, I see Genius Hour as a way to really get to know my students. I see it as a chance for them to teach me.

As I observed my students thriving to do the best the could do, I learned that they are all different, unique and inspiring, and you don’t have to be a genius to see that.


** And one last example of how amazing these students are, I have to give a special thank you to Elise and Hallie for editing, contributing and breaking my mental block on wrapping up this post.

March 24, 2018
The weeks are counting down and we're nearly at the end of our first Genius Hour period. Students are putting last minute touches on songs and poems. They're polishing book layouts in Adobe inDesign, furnishing virtual houses in SketchUp, and they're practicing their dance moves. As we wrap up week 8 of Genius Hour there a few special things to note. Juniors are BACK! First, is that our juniors have just returned from their nearly 2 week long professional internships with companies and organizations around the area. I was dying to circle up and hear about those experiences, but they already lost time last week and I wanted to give them as much time as they had available. I was also aware they spent a couple of hours debriefing earlier that morning. Spring Is Here Next week is Spring Break! Most students will use that time to take trips, visit theme parks, and relax, but I have heard mention from several students or groups that they still have a little work and practic
27 comments
Read more

June 24, 2018
Educators, if you're looking for a quick, fun game for your class that also serves to help everyone see things differently, more creatively , then try this "FUNctionality" activity. This is a game I developed with the help of my students the latter part of the year. It's been through a few iterations already and I present it in its most recent, and balanced, version. Before we begin, let me ask you this, how could you use the object in the image shown below? For most people, a single purpose comes to mind and I'll go out on a limb and assume that I don't have to describe it. However, for students playing our game, this object spawned a wide range of uses that included, cleaning up spills, writing messages, drawing circles, dressing up as a mummy, measuring the length of something and stuffing a pillow or stuffed animal. The Setup This little game doesn't take much, just literally the things you have around your classroom, and a stopwatch (you can
8 comments
Read more